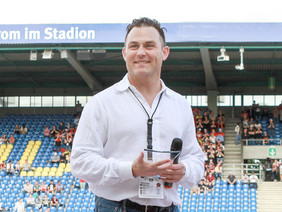 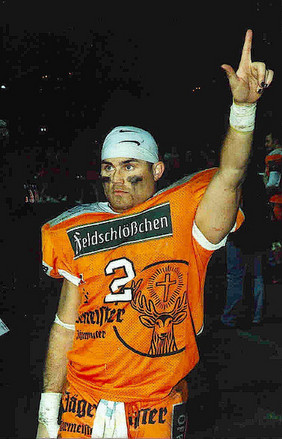 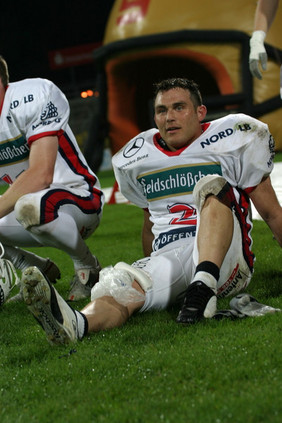 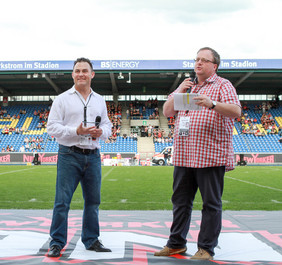 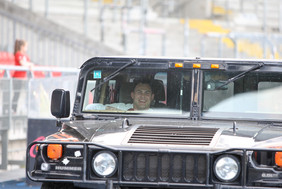 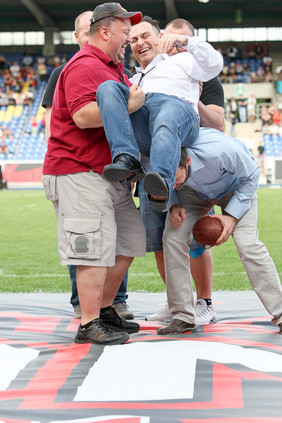 "As I played at the University of Kentucky, Jerry Claiborne was my head coach. Coach Claiborne retired after my freshman year and was invited by Gerald Meier to come coach the Braunschweig Lions. This established a sort of pipeline from Lexington to Braunschweig with many former Wildcats coming to play for the Lions. As a Junior at UK, Ryan Hockman was my roommate. After graduating from UK, Jerry Claiborne asked Ryan if he would be interested in playing in Braunschweig. So Ryan played in BS and told me all about it. When I’d see Coach Claiborne around the football facility at Kentucky, I would also ask him about the Lions and he said it would be a great place for me to continue my football career. Ryan told, then assistant coach, Kent Anderson about me. So when Kent became head coach, he called me in the spring of 1994 to see if I would be interested. I said I was interested but asked if I could think about it. However, I decided to finish school that spring and not come.

After school I moved to Florida and started to train for the next season in Germany. I called Kent that fall and said I wanted to come play for the 95 season. He said he was still interested in me but would have to get back to me. As it turned out, I was too late. I didn’t know at the time but Kent had offered the running back position to a kid from the University of North Carolina. Luckily for me, he decided not to come! Kent called me, offered me the contract and the rest they say is history.

After only one week in Braunschweig I knew I had made the right decision. I wanted to stay as long as my body would let me continue playing. Kent and Troy Tomlin made me feel wanted. They made my life in Braunschweig comfortable and fun. However, my living situation wasn’t great. My apartment wasn’t very nice but Ryan had told me about a family he had lived with named Ohle. So I asked Kent, Troy and Gerald if they wanted me back for a second season, I wanted to live with the Ohle family. Gerald said that apartment had traditionally only been for the American QB. I begged him to let me stay there and he took me to meet Martha and Dieter. I knew Bent because he played for the Lions. I met the Wessel family through the Ohle family and they became my extended German family. They took care of me and without all of them, my life in Braunschweig would not have been as wonderful as it was.

There were so many people that made my life in Braunschweig wonderful. Mathias Ding was a man who also took care of me. Mathias is a friend for life. Someone I met through football and mutual friends that has become like a big brother to me. Dave Likins, part of the UK pipeline and a former assistant to Coach Claiborne is also a dear friend. Ryan Hockman, Scott Caton and Bob Boyd were also great assistant coaches in Braunschweig that helped me and made my time in in Germany the best it could be. Radoslav Minkov and Andreas Westphal took care of my body when I was hurt and in pain. They along with their coworkers got me back on the field every week. I had some of the best doctors you could ask for…Dr. Frank Maier, Dr. Heinrich Reilmann, Dr. Günther Pfeiler and Dr. Bernd Schumacher took extra time with me and took care of me so well.

The fans are simply awesome. Braunschweig Lions fans are incredible and I was honored to play in front of you. You made summer Saturdays in Braunschweig fun and exciting! My teammates were the reason my football life was so rewarding. We fought together, trained together and won together. My teammates: German, American, Canadian, British or wherever they were from worked hard to accomplish the things we accomplished. I have so much respect for you all. We, along with coaches and support staff made football in Braunschweig fun, rewarding and the best in Europe. I look back on my time in Braunschweig with pure happiness. It’s been 10 years since I left and not many days go by without me thinking about Braunschweig. The memories always put a smile on my face. Thank you!"